skip to main | skip to sidebar

Welcome to my blog site.
I am an Australian author of a children's picture book series. Please enjoy a visit to my website at www.poppybooks.com.au where you can find out about the books, myself, Kieron Pratt, the very talented illustrator of the books, competitions for children and much more...

Hi Kids,
Please keep those pictures coming.
I wanted to tell you that collecting the Poppybooks mail has become one of the highlights of my day.
Pictures are coming from far and wide and they are truly wonderful!
Kieron and I love them! They 'put smiles on our dials.'
Mimi

Well, who would have thought that this grandmother would be blogging?
But, I just had to tell you about a little adventure that Poppy had last night. Poppy and I had just started relaxing after a busy day...
It all started when Brick was barking and growling and generally very agitated - so I went to have a look.
Unfortunately, it was very dark and my torch was out of charge and I couldn't see anything so I came inside to work out a strategy.
With still no torch and still no strategy and with Brick still upset, I turned on the outside light and opened the door to come face to face with Clarabelle, the cow! There she was on the verandah, looking at me with her big brown eyes and I'm sure she was hoping I would invite her inside.
Of course, I didn't invite her in and instead told Poppy that the cows were in the garden. Before I had time to think he had his boots on and was headed for the truck.
All well and good except that the cows couldn't care less about the truck. They just glanced at the headlights and kept right on munching.
Then it was all on! I had to drive the truck to provide Poppy with enough light to see the cows and with much hooting and hollering and waving of arms he started to herd the cattle towards the first gate. He thought he had won when they all decided to run away from the gate... More yelling and waving of arms all the time clutching on to a huge tuft of grass he had tried unsuccessfully to lure the cows with. What a sight we must have looked.
Finally and with great relief, Poppy managed to round all the cows up and get them through the gate.
But, I hear you ask, what about Brick? Yes, Brick is an Australian red heeler ie a cattle dog and yes, he loves to chase cattle and kangaroos but he has no idea where he is chasing them just as long as they run. Not a great idea in the black of night - so much to his disappointment, he had to stay at home...
and so much for a relaxing evening - maybe tonight?
Posted by Mimi King at 6:13 PM No comments:

Promote your Page too 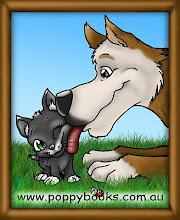